5 Tips To Find The Most Supportive Shoes For Your Feet

China is one of the world’s fastest growing economies, a manufacturing powerhouse, and a key driver of global financial markets. The Asian giant, however, is beset with problems of an ever growing population, rapidly increasing pollution levels and worsening traffic congestion. The traffic issue is so bad that massive bottlenecks are a common occurrence, and frequently make headlines around the world.

For some time, Chinese officials have been pondering over possibilities to ease traffic jams, and in May 2016, a straddling bus design was unveiled at a technology expo in Beijing. This new concept vehicle, dubbed ‘Transit Explore Bus’ (TEB) would be a mega-size elevated bus running along rails on the roadside. It would be capable of driving over other vehicles, thus providing an innovative solution to bypass the notorious traffic clogging that is so common on Chinese roads.

This week, the TEB became closer to reality when a road test was carried out for a prototype on August 2, 2016.

The TEB, which is 72 feet long, 23 feet wide and can carry 300 passengers, is expected to reach speeds of up to 60 km per hour. It can allow cars to pass underneath it, thus enabling regular flow of traffic. Up to four TEBs can be connected together, allowing as many as 1,200 passengers to commute at a time. The test, carried out in Qinhuangdao, north China’s Hebei Province, gave the bus designers a chance to evaluate the braking system, drag and power consumption of the vehicle. Keep in mind though that the trial run happened on a 300-meter long controlled track. The real test would be how the vehicle performs in the milling crowds and chaotic traffic of urban China.

‘I wanted to officially show people that this is entirely possible and that the bus can be up and running. We were inspecting and testing the vehicle for a range of functions, like ignition, braking and other processes, to see if they all work together and there are no problems,’ says Song Youzhou, the designer of the straddling bus.

‘The TEB has the same functions as the subway, while its cost of construction is less than one fifth of the subway,’ another engineer Bai Zhiming said, speaking to CCTV.

According to reports, countries such as Brazil, France and India have already shown interest in using the model.

A full trial run, however, is not expected to happen until mid-2017, said Song.

Will the TEB be successful?

The transit elevated bus looks like an ambitious project and questions have been raised aplenty regarding the viability of such a transport solution. For instance, would it not be quite tricky to drive underneath the TEB, since there won’t be any fixed point of reference? The TEB will move at one speed and the cars below it another. Quite disorienting, one must say. Also increases the risk of accidents and collisions.

For this, one of the explanations by Best The News is this:

‘The bus will have alarms to warn cars traveling too close to it, and signals to warn other vehicles when it is about to turn. It would have inflatable evacuation slides similar to those of an aircraft. Optional features could include sensors to keep it from colliding with a person or object (such as an over-height vehicle in front), warning lights and safety curtains at the rear to keep drivers of over-height vehicles from going underneath, repeater traffic signals underneath to relay the indications of traffic signals up ahead, and animated light displays to simulate stationary objects to prevent disorientation of drivers underneath.’ 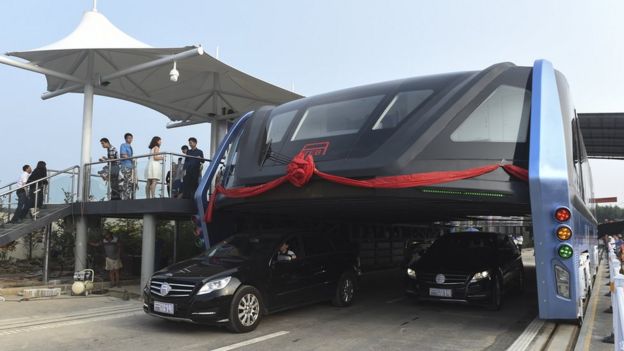 Skeptics have also raised other valid questions- will the bus be able to negotiate turns? What about drivers who jump in and out of lanes? And won’t there be any trucks running on the road, since such a vehicle rules out the possibility of any other high vehicle plying alongside? Also, no bridges and overpasses for TEB, so that is yet another headache.

‘It might be a fantasy to deploy the ‘elevated bus’ on existing urban road infrastructure. It’s very impractical. Even if the ‘elevated bus’ is deployed on ordinary urban roadways, it will need special groundwork, otherwise the roads will be crushed to smithereens before long,’ the Beijing Daily said in June.