7 Ways On How Renting Storage Units Can Benefit Business Owners

(A Game of Thrones reference this early in the game? Did she do it? Yes, I did.)

Swiss Army Man is a whimsical, flatulent tapestry of social taboos, bodily humor, and hallucinatory absurdism crafted by the two dudes who directed the music video for Lil Jon’s ‘Turn Down for What’. And it’s- exquisite. Like, breathtakingly, heartwrenchingly, change-your-life, exquisite.

Scribbled pleas for help drift across the ocean- no one is going to answer. A stranded soul, Hank, hangs himself with the belt of a dead, farting man he found on an otherwise totally deserted, isolated island. Hank’s humming a somber hymn, he’s tightening the noose- Hank watches the dead man roll across the beach and into the ocean propelled by its own farts. Hank ropes the man in with his noose, mounts him, and they ride in (questionable) glory across the water to dry land.

You’re confused. You want to laugh. You want to cry. You ricochet between fascination and repulsion. But you’re still transfixed. And the fart just keeps going on and on. Is this really happening? How are you supposed to react right now? 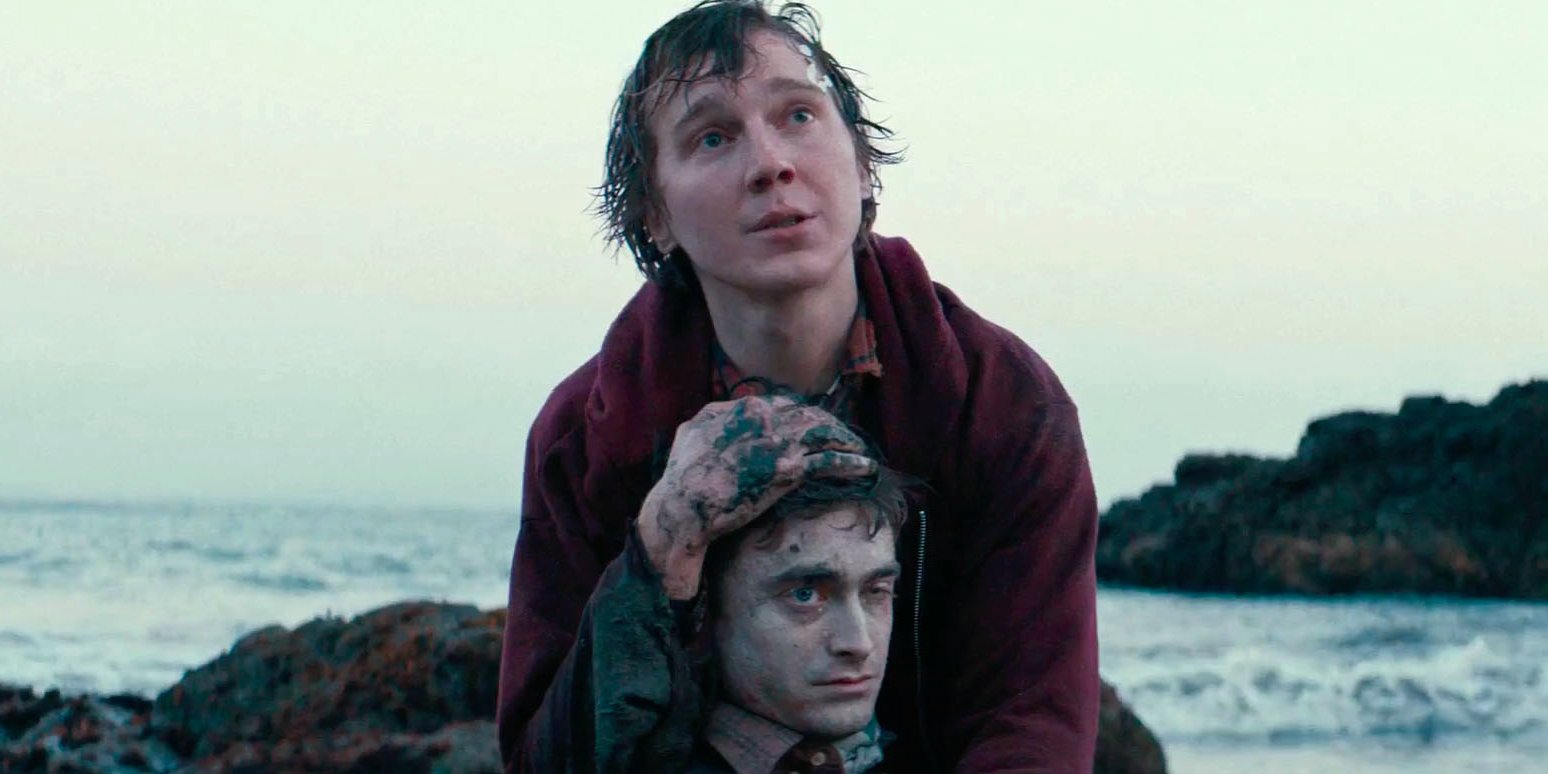 Am I the only one?

You know how you can usually feel out the audience in the movie theater? I saw Swiss Army Man for the second time today, and I can still feel the audience during the opening scene- not knowing whether to laugh or keep a straight a face, hushing each other, stifling laughter, muttering, shaking their heads, even walking out of the theater, etc. Did a suicidal castaway really just pull down dead Harry Potter’s pants to unleash the weapons grade gas rocketing from his asshole? The answer is yes. And what’s more, is it’s the most beautiful thing I’ve ever fucking seen.

Hank is beginning to pine for home after an incalculable time in isolation and exposure. The journey ahead seems impossible, but Manny the Dead Guy is endowed with magical powers that somehow get Hank through every hardship. As a dead guy, Manny doesn’t remember anything about what it means to live, and Hank has to help him remember. It’s the least Hank can do for the guy who saved him from certain despair. The more reasons they find to live, the closer they get to home. Cheetos, Jurassic Park, orgasms, the list goes on. 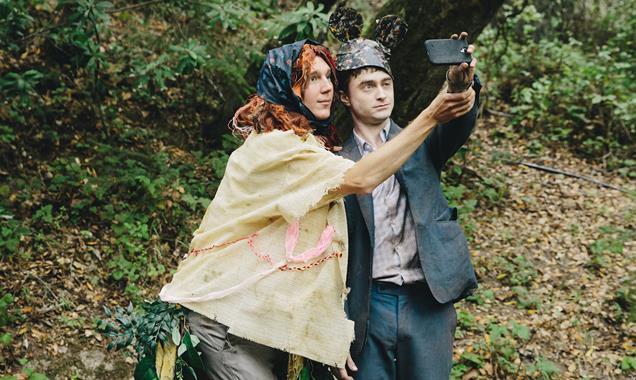 The entire soundtrack is a dreamy, meandering psychotic’s hymn- it effortlessly stirs up a magical atmosphere wherever and whenever it’s played. I saw a trash littered alley today illuminated with the glory of a thousand angelic forces the moment I played ‘River Rocket’ on Spotify. I seriously did. Featuring the efforts of Paul Dano, Daniel Radcliffe, as well as Manchester Orchestra’s Andy Hull and Robert McDowell, it’s a hopeful, undaunted, quite literal accompaniment to the movie. Down to the lyrics, “We Killed A Raccoon/Now We’re Using Your Body like It’s a Machine Gun/Now We’re Killing Some Fish/Now Our Friendship is Blossoming/Let’s Eat the Stuff We Killed….Are We Falling In Love/Montage/Montage/ All We Ever Needed Was a Montage.”

It’s quite a cheeky, self aware little song. And like the others, it ebbs and flows aimlessly, then cresendos like a spirit welcomed into heaven with a hundred of ethereal vocal harmonies and melodies. Layer upon layer of commonplace cries, tunes, or thoughts that directly mirror Hank’s emotions as he navigates his unorthodox hero’s journey. Whoa. Bah. I’m fucking crazy. WOOO. Diddlydum. AH. AHHH. The lyrics are literally the repetitious ramblings of a deranged psychopath, but the way the pieces are put together- it sounds like heaven.

Hank and Manny’s nec-bro-phelia blossoms. Manny professes himself to be Hank’s ‘Multi Purpose Tool Guy’. Any problem, any issue, any doubt that arises in Hank’s mind or in the outside world- Manny solves it. Manny provides all the entertainment, all the solutions- his innocence deflects all the uncertainty or pain that arise in Hank. Hank is surviving through him. He’s conquered his fears of the outside world through Manny, and by the time they make it home-

Hank’s fear comes back full throttle when he returns. He’s as awkward and tense as ever. His true love, Sarah, is just a woman with her own husband and child on a bus whom he’s never met. And Hank has basically been living in the forested acreage behind their backyard for weeks.

As Hank’s father, the camera crew, the police, Sarah and her family surround Hank and Manny – we see Hank’s just a criminally insane dude grappling with his purpose on the earth and projecting his fears onto a corpse. And Hank realizes, all he needs to love and accept is himself. It’s the simple miracle that makes all the other miracles worth it- self love. And then he farts. And he owns it. He owns himself.

By the end, we’re laughing and crying together. It’s like you and I, and everyone in the theater and maybe the world could just fart away all our fears, and dance and sing together in harmony forever. The insecurities have melted away in the knowledge that there’s always something worth living for. There’s always a miraculous, beautiful thing to keep you going- and it’s the potential of love in you. Hank only decides to live when he’s face to face with death. When he’s face to ass with the last poot loosed after some stranger’s infamous last words or dramatic last breath. He realizes life is random. It’s total chaos, it’s absolute pain, most of it is confoundingly preposterous, it’s just one beautiful, twisted joke- and that’s okay. Because you have the power to fulfill a purpose that’s beyond you, one you may not understand- one that goes on after you’re dead.

The metaphor of Swiss Army Man may at first seem crudely immature, but don’t let your initial discomfort lead you to miss out on one of the most uniquely uplifting comedies since Being John Malkovich or Adaptation. I hope Charlie Kaufman isn’t offended I’m comparing his works to a movie best known for farts, but what can ya do? The story is executed with such inventiveness and heart, such vibrance and self awareness, so alive with the energy between Dano and Radcliffe, by the end you really feel like you could soar to heaven on any dead body to fart its way onto your path. And Radcliffe is seriously on his Daniel Day Lewis shit with a painstakingly tragic, ‘My Left Foot’ worthy performance. DAMN, DANIEL. Back at it again. Back. At. It. Again.

The first time I saw the trailer, I cried. I watched it many more times, and I cried many more times. I shoved my phone in friends’ faces and cried while they laughed awkwardly. I cried for the loveliness and imagination of the world it was promising me as a viewer- and I’m happy to say that Swiss Army Man delivered on that promise. 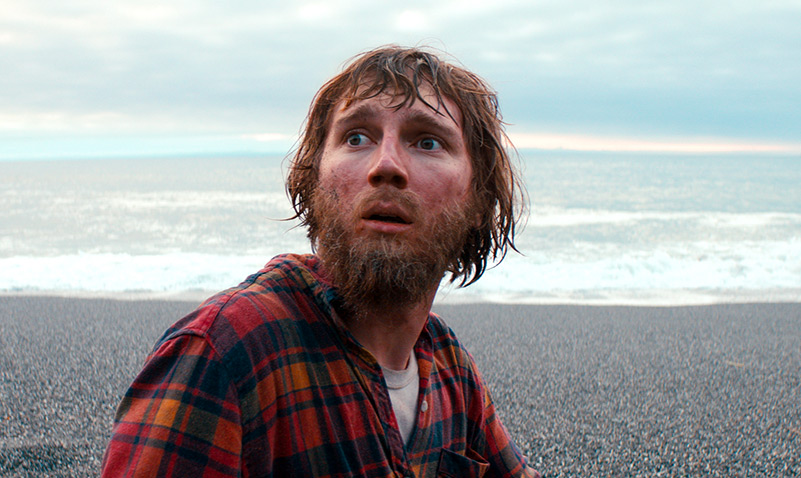 I had high expectations from the beginning, I couldn’t help it. The tone it was trying to pull off seemed impossible, and I was intrigued. I didn’t brush it off as that ‘Farting Corpse Movie’. I wasn’t shocked or confused or disgusted. I like to familiarize myself with death and dead things, I like fecal humor, I like sad things, I follow medical pages that specialize in disease, infection, and deformities, I like stories that bring me closer to my fears and triggers. I want to know them, explore them, put a face to them. I want to know them and not be afraid anymore, so I can live my life freely and fully. And yes, so I can fart freely and fully. So we all can.

We just have to remember that we’re all here for a purpose, and the universe takes its time. – A lyric from the original song ‘River Rocket’ (Featuring Paul Dano, Daniel Radcliffe, Andy Hull, Robert McDowell)