Why Digital Marketing Is Important For Your Business

Mark Zuckerberg is under fire as accusations rise that the social media giant Facebook is taking unprecedented steps towards censoring the material that appears on its site. The latest cause of concern comes with the censorship of a Pulitzer Prize winning photograph taking during the Vietnam war.

It is an image that has become more than iconic. It represents the horror and loss of innocence associated with war. For Facebook to censor this image they do more harm than good.

As Zuckerberg is Facebook’s Chief Executive he is the one taking  the majority of the blame being placed by Norway based Espen Egil Hansen, the editor in chief of Aftenposten, who posted a open letter on Facebook to the social media master himself. Hansen stated he believes Zuckerberg is harming press freedoms by limiting what can and can not appear on social media.

The accusations of bias on the site are piling up. These latest harsh words come just after Facebook was the center of attention due to the revelation they were suppressing conservative news from appearing under the “trending” section of the site.

This news should be alarming to the majority of Americans who use Facebook as their main news source. Major news sources like the Wall Street Journal and New York Times rely on Facebook as a cheap and easy way to reach out to the social media sites nearly 1.7 billion users across the globe. 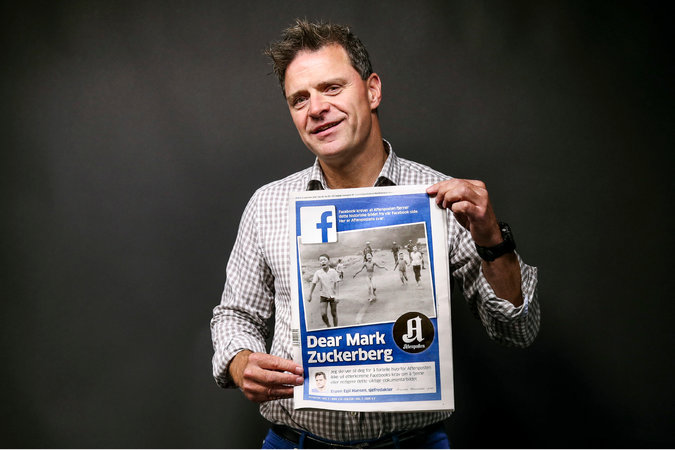 By leaving much of what Facebook users see and interact with on the site up to algorithms and over worked employees they run the risk of inadvertently becoming a danger to those they are suppose to inform. The concern is the site simply has too much control over what viewers can read and where they can source their information from.

Moreover Facebook earns Billions of dollars a year based on deals it has signed with businesses all over the world allowing for advertising on specific pages to push their product more and more effectively.

According to Mr. Hansen, “Facebook not only has become a media company, but Mark Zuckerberg is the most powerful editor in chief in the world,” stated the Newspaper’s editor in chief  in an interview on Friday. He went on to say, “as the position of traditional media companies gets weaker and Facebook becomes stronger, the responsibility for Facebook and Mark Zuckerberg grows.” In Facebook’s defense it can be hard for an algorithm to know when it is okay to display a naked picture of a child and when it is not. There is a line they must walk between allowing people freedom to post and the protection of children.

Lena Pietsch, a Facebook spokeswoman, stated “Our solutions won’t always be perfect but we will continue to try to improve our policies.” Fluffy words are to be expected from a multi-billion dollar company but true improvement is what Facebook needs if it wants to prevent more of these embarrassing censorship debacles in the future.