The sixth season of HBO’s epic fantasy drama Game of Thrones has become a blockbuster hit, breaking all ratings record with its highest viewership ever (see image below). The show is like an exquisitely woven set of narrative tapestries, adorned with momentous montages of its beloved (and reviled) characters gearing up for a final confrontation that would engulf them in a glorious maelstrom of ice and fire. The six episodes that have been broadcast yet have made us elated, broken our hearts and kept us yearning for more. Here are seven moments from Season 6 that have practically reset the dynamics of the show and predict dire ramifications for the seven kingdoms: WARNING Spoilers to come.

Seeing Theon reunite with his sister Yara and support the latter as the true deserving heir to the Iron Island was a wonderful moment to behold. It had become painful and a bit exasperating to see Theon as Reek grovelling to the whimsical cruel fantasies of Ramsay Bolton and quite refreshing to see his transformation back into Theon (albeit too quickly, in my opinion).

However, cold water is poured on the plans of the brother-sister duo when their uncle Euron Greyjoy resurfaces and stakes his claim to the Iron Island, and decides that his niece and nephew should be murdered without any haste. Theon and Yara have other plans though, and quickly flee with all the ships in tow. It will be great to see what aces up their sleeves the Greyjoys siblings have to fulfil their aspirations, while braving an ongoing civil war and a murderous uncle out to hunt them down.

Arya Has a Name

Arya Stark’s arc has been one of the most intriguing ones in Game of Thrones. We knew before that she is seeking revenge against the people who murdered her family and her submission to the Many-Faced God was seen as her steely resolve to make her ends meet. In episode 6, however, when Arya is tasked to poison Lady Crane- the actress who plays Cersei in the theatrical reenactment of Joffrey’s poisoning- she has a moment of realization of what it means to take a life and how it can affect others. When Lady Crane asks Arya what her name is, she doesn’t repeat that mumbo-jumbo ‘a-girl-has-no-name’ crap and instinctively replies ‘Mercy’.

Arya then goes ahead and retrieves her sword- the Needle, setting up for an inevitable clash with the Waif (who is anyway a TV character and has no mention in the books, so really hoping that Arya guts her like a fish). How Arya deals with Jaqen H’ghar and the mysterious workings of the many-faced-god will be really interesting to follow.

In what was perhaps the best episode of all the six seasons of Game of Thrones, we finally got to know in episode 5 ‘The Door’ why Hodor keeps saying ‘Hodor’ all the time. Hold the door! Hold the door! Hold the door! Hodor! Bran Stark, who is revealed to have awesome time-bending warging abilities, actually uses his powers to warg Hodor in the past to use his help against the Night King and his hordes of frenzied White Walkers in the present. Hodor’s last instructions are to ‘Hold The Door’ and this is shown in such a stunning and heartbreaking manner that I won’t be surprised if it tops every Game of Thrones list of most tragic deaths ever.

Also, Brandon Stark’s destiny as the three-eyed raven throw up several questions. Was he somehow responsible for the current state of affairs by messing up stuff in the past? This is highly likely possible since the Night King was able to establish physical contact with Bran in the past that resulted in simultaneous ramifications in the present. But that can also mean that the entire Game of Thrones history could be somehow altered by Bran. Does one person really hold the key to shape the fates of the seven kingdoms?

The Resurrection of Jon Snow

Ah! Jon Snow. The perennial favorite of all Game of Thrones fans (along with Tyrion and Khaleesi), it was quite inevitable that Lord Commander would be resurrected after being betrayed and brutally stabbed to death by that traitorous rat faced Olly and certain other idiots of the Nights Watch. The moment Jon Snow gasped a choked breath at the end of episode 2, I am sure the collective happiness index of the entire world notched up several percentage points.

You simply CANNOT kill the one underdog that we are rooting for! Anyway, after Snow hanged Olly and other traitors for treason (another surge in the global happiness index), he relinquished his role as Lord Commander. He was eventually reunited with Sansa Stark, who now has the unswerving protection of the redoubtable Brienne of Tarth. What transpires next will be knows soon, but we are hoping that Ramsay dies a horrible death at the hands of Jon Snow or Sansa Stark.

Daenerys Is Back In All Fire-Blazing Glory

Daenerys Stormborn of House Targaryen, the Unburnt, Mother of Dragons, khaleesi to Drogo’s riders, and queen of the Seven Kingdoms of Westeros. The description is enough to make anyone swear undying loyalty to the pure spunk that is Daenerys. After she is captured by the Dothraki, we see Daenerys being subjected to an array of patriarchal bullshit by Khal and his gang of sexist ruffians.

However, Daenerys, being the Mother of Dragons and slayer of all dunderheads alive, refuses to cower down and just smirks her way to fire-blazing awesomeness by burning down the Dosh Khaleen (where the widowed Khaleesis live) and all the Khals who had assembled there. As she emerges from the fire unburnt, standing naked in front of everyone, it is a serious power moment that reminds you why Dany is a real force to be reckoned with.

In a new development that is bound to have serious implications for King’s Landing, Tommen Baratheon and Margaery Tyrell join hands with the Faith Militants, putting a wrench in the plans of Jaime and Loras to rescue Margaery. Initially, it seemed that Margaery is again playing a game by feigning agreement with the High Sparrow, but her self- introspection makes the entire thing quite believable and convincing. 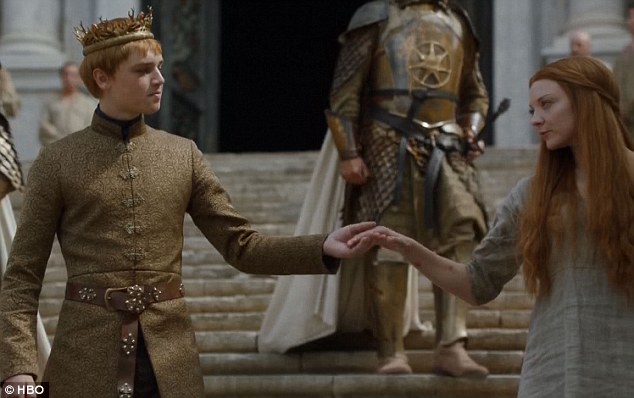 Tommen proceeds to strips Jaime from his role as Kingsguard, making things all the more confusing for the Lannisters and Tyrells. Now Tommen is the nicest Lannister that we know, but it remains to be seen if he becomes more aligned with the Faith Militants and lets the High Sparrow exploit him in taking all the decisions for the city.

The Return of Benjen Stark

Benjen Stark, the younger brother of Ned Stark, First Ranger of the Night’s Watch (First Rangers are members who go on scouting missions to hunt down wildlings beyond the Wall) and a personal hero of Jon Snow is back. We had last seen Benjen in the third episode of the first season, when he disappeared north of the Wall.

His disappearance spawned several fan theories theorizing what happened to the character, with some even speculating that he was actually the Night King. In episode 6, however, Benjen shows up in spectacular fashion to rescue Bran and Meera from the clutches of an ever menacing White Walker army. Benjen’s return and his teaming up with Bran, who is touted to play a pivotal role as the series moves towards its end, is going to be tremendously interesting to watch.