If you’ve been paying any attention at all to recent advances in materials science, then you’ve probably heard about graphene. The first two-dimensional material ever discovered, it’s been hailed as a ‘miracle material’ because of its uniquely useful properties. Graphene could end up in new smartphones, tablets and even next-generation rockets.

However, until recently, it’s been difficult to manufacture in large quantities – but that may be about to change. New techniques have allowed graphene manufacturing to move into the mainstream, and it’s likely that graphene will be everywhere in the next 20 years.

Put simply, graphene is a one-atom-thick layer of Carbon arranged in a lattice – a honeycomb-like grid. It was discovered in 2002 at the University of Manchester in the UK by André Geim and Konstantin Novoselov, who received a Nobel Prize for their work in 2010. Because it’s only one atom thick, it is effectively a two-dimensional material – you can’t get any thinner than a single layer of atoms! (It’s just 0.33 nanometres high, and one gram can cover an entire football pitch.) What makes graphene truly interesting is that it has the potential to be used in many, many future technologies.

For example, graphene is an excellent electrical and thermal conductor – more so than copper, and 1000 times more so than silicon. It’s also harder than diamond, 300 times stronger than steel, and can stretch up to 20% of its individual length.

Because of its thinness, it may herald a new wave of flexible devices embedded almost anywhere, from clothes to windows to walls. It also paves the way for fast and cheap DNA sequencing and improved biosensors, and it is also hoped to help advance therapies and diagnostics for a range of diseases. It’s also likely to make solar cells more efficient and cheaper to produce, as well as improving the performance of batteries, supercapacitors and fuel cells.

Historically, discoveries take around 40 years to go from being part of lab work to being used in commercial endeavors. However, graphene has only been around for 12 years – and already it’s being touted as the next revolutionary technology. 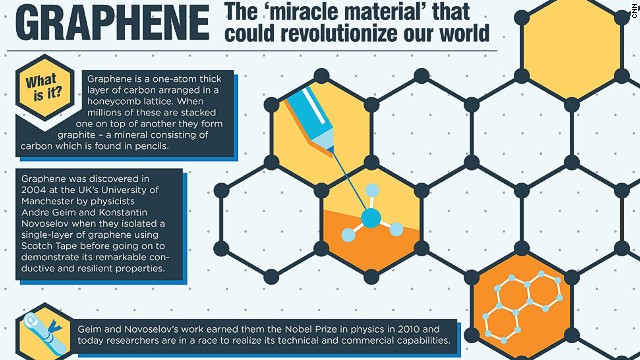 2002: Graphene is discovered when a physics professor and his students pull tiny shavings of graphite off some discarded Scotch tape and look at it under a microscope.

2004: Its principal inventor demonstrates that graphene can be used to conduct electricity.

2010: The material wins its inventors the Nobel Prize in physics.

2014: The New Yorker warns that much of the celebration of graphene is “hype,” as the product is still too expensive and untamed to be useful – but also says that it “may be the most remarkable substance ever recorded”.

2015: Graphene is in tests for night vision, artificial muscles, search and rescue robots, bullet-proof gear, super-efficient electric cars, cancer treatments, biosensors to look for toxins in food and medicine, and many other applications.

It’s important to note (see the New Yorker’s warning) that all the issues with graphene still haven’t been worked out; the very properties that make it so useful also make it difficult to deal with. For example, the high conductivity makes it very hard to govern the flow of electricity across the material, and turning the flow on and off remains elusive. A lot of work remains to be done by research scientists and electronics technicians to master the material.

One issue with graphene is that it’s difficult to manufacture, at least in a way that makes it useful to scale up for commercial use. Yet the first pilot plant in Australia has just opened, run by a company called Imagine IM, which is planned to produce enough graphene for a conductive geotextile made by Victoria-based Geofabrics that is planned to be launched in Australia in 2016, and for other products that are also in R&D. The plant should produce up to 10 tonnes of graphene per year. The global market for graphene products is estimated to reach US$1.3 billion by 2023, and in 2018, US$100 million of graphene will be sold for use in a variety of commercial products. Since the geosynthetic industry is expected to generate US$16 billion per year in global sales by the end of 2018, growing at 10% per annum, it’s clear that being able to manufacture graphene at a large scale is crucially important to being able to fulfil these predictions. Careers You Can Get Into With An Organizational Management Degree What Must An Entrepreneur Assume When Starting A Business